The Zoom G1Xon is an $80 Pedal that gives you 75 effects, plus a bunch of other stuff (wah pedal, amp simulations, guitar tuner, more). I bought this pedal in October 2017, and I’m writing this in late June 2018. 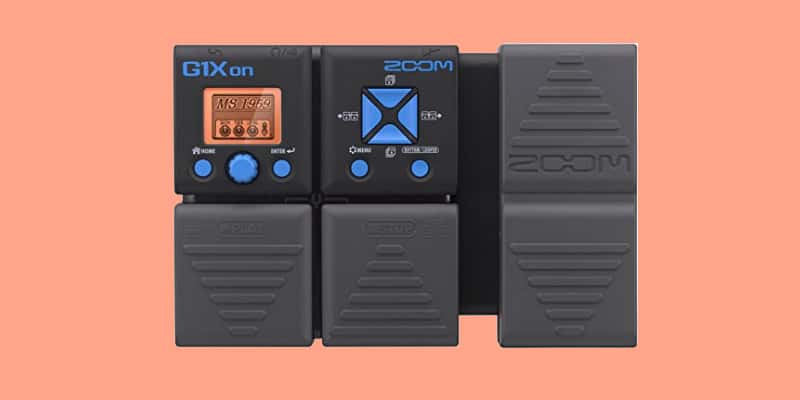 I’ve used the Zoom G1Xon quite a lot over the last 8 months, and I feel very, very confident in recommending it to beginner guitarists.

I’ve actually had a bit of trouble writing this review, because the pedal does everything I can imagine, and I worry that I sound too into it, or like the company is paying me to write this (they’re not, of course). The fact is, I just love this unit for beginning guitarists, it’s an amazing product.

As someone who has played guitar since 1990, and who keeps up to date on gear, I am blown away by the value the Zoom G1Xon gives you. I do think it’s fair to say that this pedal does everything, and it’s really astounding that it can do so for less than the price of a standard pedal made by a bigger brand (like BOSS or TC Electronic for instance).

The Zoom G1Xon (not a catchy name!) contains 75 effects, as well as 14 simulated amp sounds (these alter the sound as well), and some other goodies like a looper, a tuner, drum beats, and a wah-wah pedal.

The 75 effects are a wide-ranging selection of what are mostly clones of popular guitar effects pedals. For instance, one of the most iconic and popular pedals of all time is the Ibanez Tube Screamer, and the G1Xon has a version of it, called “T Scream.” Similarly, the super-popular BOSS OD-1 Overdrive Pedal is represented here under the simple name “Overdrive” (the manual tells you what effect each is based on).

If you’re not familiar with the original effects, that’s fine, but as you, or your child, progresses, you might want to play a popular song with the same sounds the original guitarist used, which these simulations make easy.

I used some fuzz/distortion sounds as examples already, but this pedal also comes with tons of delay-based effects. These make your playing sound more echo-y, and there are different flavors. You can sound like you’re playing in a small hall or a huge church, or you can add a chorus effect for a more shimmering sound. These kinds of effects kind of “fill out” your sound, and just make it sound a little smoother, which is always much more satisfying.

The amp simulations in the G1Xon are cool too. There are tons and tons of amplifiers out there, and they’re generally pretty expensive, and/or tough to find. A beginner who loves Eric Clapton‘s work is never going to go out and buy a Marshall 1962 Bluesbreaker amp, but they’ll be delighted to load up this unit’s “B-Breaker” amp simulation and hear that classic, smooth blues tone.

I own a lot of nice, brand-name pedals, but I also have a G1Xon, and I use it all the time for practicing using headphones (which obviously can be super-handy in many situations).

Many guitar amps don’t have headphone jacks, and when they do, the sound through them often sounds weird – kind of grating, or sometimes almost claustrophobic.

You can buy cheap headphone amps, and they’re cool because of how small they are, but they generally only give you 1 or 2 sounds (usually clean, or distorted) that you can use, and they still cost between $25-$40 for one that doesn’t have terrible sound. Their small size can also be a double-edged sword, as it’s quite easy to lose track of them for months because you put them somewhere weird (like in the pocket of a guitar case you rarely use – don’t ask me how I know this).

Although it seems like a small thing, the headphone jack is a huge bonus, and I’m glad they included it. One thing to note is that the jack is bigger than normal headphones, so make sure to grab an adapter – this cheap one is fine.

Every guitar player needs a tuner. Commonly, beginners will grab a Snark Tuner, which is a great, very cheap solution. I highly recommend that everyone gets one of these (and maybe even an extra to throw in your gig bag so you can’t forget it at home).

Having said that, if you don’t already have a tuner, then having one built into the G1Xon can save you some money. You can activate it at any time by pressing the 2 main pedals at once, and it’s very easy to read and use.

It can be handy for those times where your Snark Tuner is in another room, and you don’t want to interrupt your flow to go grab it. The best tuner is always the one you have with you, ready to use.

The Looper and Built-in Rhythms

Once you have progressed a little bit on guitar, it can be extremely handy to play along with a backing track of some kind. This pedal has a couple of ways you can do it:

Most importantly, it has a built-in looper. If you’re not familiar, a looper is a pedal that lets you easily record some guitar playing, and then loop it indefinitely so that you can play along with it.

The typical way to use it is to step on the pedal (which activates it), play some chords, and then step on it again to stop it. Then, the chords you play begin looping automatically, and you can play over them.

Loopers are incredibly popular, because they’re fun, but also enable you to develop all sorts of skills. According to Reverb.com, the best-selling pedal of 2020 was the TC Electronic Ditto. It’s a great pedal (I have one myself), and is dead simple to use, which is great for beginners. The looper that’s built into the G1Xon is similarly simple, and a welcome addition that will benefit players of all levels, no matter what genre of music they’re into.

The G1Xon also has built-in rhythms. There are 68 of them, and I’m going to be honest – I’ve never actually tried these. Until I started to write this post, I didn’t actually know they were in there. I checked out most of them, and they’re pretty decent. They cover a wide gamut of musical styles, from Bossa Nova to fast punk rock.

These are something I can see being very useful for beginners, especially as they’re working on keeping a steady rhythm (one of the most important, and overlooked, aspects of becoming a great guitar player). Unlike the looper, these rhythms might be something that you grow out of once you get to a certain level, but overall they’re a nice addition and will be very useful to a certain amount of guitarists for sure.

The G1Xon has a built-in expression pedal. This is a long pedal, approximately the length of a human foot, which you can rock back and forth. The most popular use for this kind of pedal is to create wah-wah effects.

The wah-wah pedal has long been a staple in many styles of music, from funky ’70s-style stuff to hard rock and heavy metal. Playing guitar through a wah pedal is one of the most fun things you can do as a guitar player, as anyone who has tried it knows.

I’ve owned a few wah pedals over the years, and while they’re fun, I never really have a steady use for them personally. It’s an effect that you probably don’t want to be using all the time, as fun as it is to pull it out now and then. I’ve also had trouble with traditional wah pedals gathering a lot of dust inside and sounded scratchy, due to the nature of their construction.

The pedal on the G1Xon works digitally, so scratchiness is never a problem. I’m not sure if it sounds quite as organic and analog as a Dunlop Cry-Baby (the most iconic wah-wah out there), but it’s not far off, and another nice addition to this unit.

One nice thing about it being digital is that it can also be switched to use as a volume pedal. This is basically what it sounds like: Moving the pedal in one direction makes your volume go down, going the other way makes it go up.

Volume pedals have never been that huge a thing in the guitar world, but they have their uses. I don’t think a beginning player really needs a volume pedal, and is probably not going to use the one on the G1Xon very often, but it’s there.

Who this pedal isn’t for

I wrote an article recently listing the top guitar pedals for beginners, and I stuck this one at the top of the list, but I also listed some other products there. After raving about this thing for this entire article, and saying that it does everything, you might be wondering why I bother recommending anything else.

The fact is, as much as I think this is a perfect pedal for a beginner, I don’t know if it’s perfect for everyone.

The majority of beginning players are not going to remotely care about this, but there are definitely some folks, maybe in their late teens, who aren’t going to want to be seen with a grey/blue box like this, that frankly looks a bit like it was designed in the early 2000s.

If a teen is playing guitar because they’re massively into Jack White (or any other specific player) and want to emulate his style, there’s a good chance they’ll want to use the specific pedals he uses, or at least similar individual pedals. Just having one box that clones all of them may not be satisfying, or feel as cool as the real thing, and this might not be right for them.

In another vein, to adjust all the pedals in this unit, you need to dive into the various menus and adjust the knobs on an LCD screen. This is a lot more fiddly than just adjusting knobs directly on individual guitar effects pedals, but that’s the trade-off you have to make for getting so many pedals in one cheap box. And luckily, it’s really the only significant trade-off!

So I guess I’ve already probably hammered on about what a good value this pedal is, but it’s true, it’s pretty great. Multi-effects guitar pedals like this have been around for quite some time now, but in the last 5 or 10 years, they’ve really ramped up in quality. I guess this shouldn’t be surprising, since technology is always advancing, but I still get pretty blown away when I think about what something like this would have cost when I started playing guitar, if it had even possible to make it back then.

Look below to check the pricing on Amazon, and please leave me comments with your thoughts. Have you tried the Zoom G1Xon, or have an opinion on multi-effects pedals in general? Let me know!