Arguably, strings are the most important part of a guitar. Strings are what make the actual sound that comes from your guitar.

Without them, unlike other parts, the guitar would be totally silent. So, when you think about it, it’s kind of weird that people don’t pay as much attention to the type of string they use as to other things, like the brand of guitar for instance.

A lot of folks don’t even know, or remember, what type or gauge of strings are on their guitars. I have to admit that this happens to me now and then – I just took a Telecaster I own out of its case the other day and had no clue what gauge of strings were on it. I have a pretty good guess, but I wouldn’t swear by it.

The good news is this: Even if you don’t know exactly what’s on your guitar (like me), there are a ton of great strings out there these days, and there’s a very good chance you’re using some. If not, you can always change them, and probably will have to sometime anyway.

The Most Important Thing to Consider

Especially for beginning guitar players, the main thing you want to think about is how the strings feel.

I spoke with Jon Moody, who is the manager of Digital Brand Development and Product Development with GHS Strings, and he confirmed this.

“Ultimately a set of strings that is comfortable for a child to play is more important than anything else”, Moody told me, “that’s what should come first when it comes to beginning guitarists.”

This makes perfect sense, since a beginner isn’t going to be very excited about playing, or motivated to practice, if their finger are constantly in pain.

What Are the Most Comfortable Guitar Strings?

Since Moody actually designs strings, he was the clear person to ask about this.

“The gauge of string makes a big difference for a beginner,” Moody said, “you don’t want anything too heavy, or it becomes hard to play, especially for smaller fingers.”

Guitar strings are measured by their thickness. On a typical set of strings, the thinnest string might be around 0.09 inches, and the thickest could be 0.42 inches. That particular gauge of strings would be marked on the package as something like 09-42, as illustrated here: 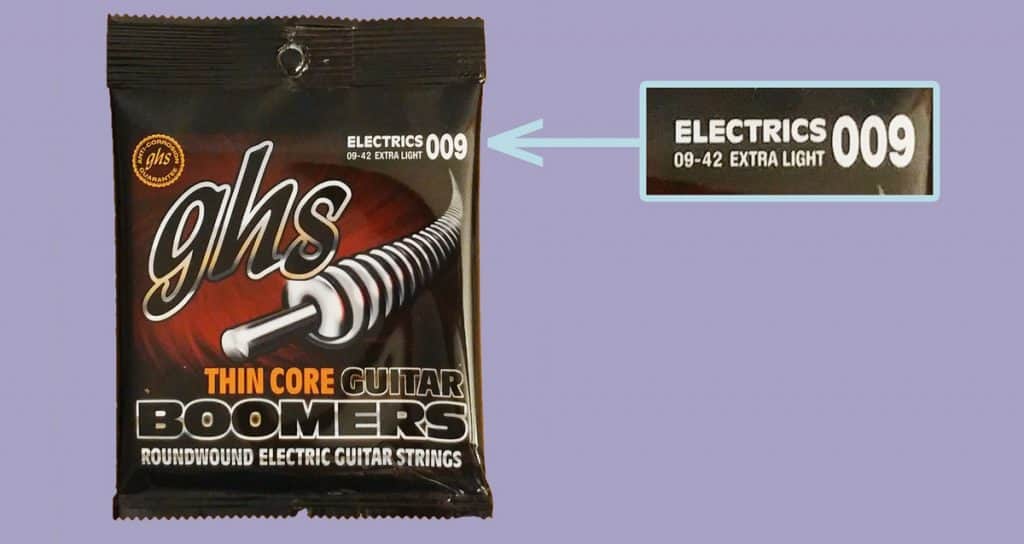 As the numbers get higher, the strings get thicker, and a bit harder to play until you’ve built up to them.

The lowest that electric guitar strings go is about 08-38. These are a good choice for a beginner, but they are also easier to break. I generally advise beginners to try out 09-42, which are still comfortable for most players, but there’s nothing wrong with going down to the 08s – you just want to make sure not to really smash away at them (this can be tough for smaller kids, who don’t always have fine-tuned muscle control).

The lowest that acoustic guitar strings go is about 10-46. A bit thicker than electric, but that’s the nature of acoustics. These are harder to break than the thinnest electric gauge, so you’re certainly safe buying a pack of these while you’re starting out, and it’ll help you get going faster than if you try to start with the beefiest, thickest gauge.

I like to tell people that, as a beginner, you should approach strings like you might approach learning to bake a cake: As a newbie, you probably wouldn’t jump right into making a fancy, 5 layer cake with a swirl of rainbow colors inside – or at least, if you did, you wouldn’t progress as quickly as if you started with a simple chocolate cake, then moved up in difficulty one you were comfortable. I’m making myself hungry here.

So What About Broken Strings?

Strings break now and then. It depends on what kind you use, how hard you play, and other factors, but eventually, it will happen.

Breaking a string isn’t a big deal at all, and they’re cheap to replace. You can usually buy a single string at a music store, but if you’ve been playing your current set for a while, it’s often a good idea to just replace the whole pack.

I’ve talked to so many beginners who find changing strings to be daunting, but it’s extremely easy. Once you’ve done it once or twice, you’ll realize that there’s nothing to it. The absolute worst thing that can happen is.. I don’t even know! I guess theoretically, you could accidentally cut a string way too short, and have to buy a new one (for about a dollar), but I don’t think I’ve ever seen that happen.

Fresh strings are nicer to play, they ring out better, and they even look shinier. My advice is to never be stingy or lazy about changing them when you need to. They’re so cheap, and a new set makes so much difference to your sound.

The best news is that great guitar strings are cheap. A good set of strings from one of the best string companies will cost you anywhere from 5 to 7 bucks, and should last you quite a while.

That’s why the number 1 thing you should avoid is buying needlessly cheap strings. If you check on Ebay or Amazon, you can find strings by no-name companies for insanely low prices. Sellers are shipping sets of strings from China for as low as $1.50, shipping included, which boggles the mind. These should be avoided like the plague.

If you’ve ever tried really cheap strings, you’ll know how uncomfortable they are to play, and how fast they wear out. I’ve bought guitars before that the (big name) manufacturers put cheap strings on, and they’re insanely annoying to play until I change them. I have no clue what the $1.50 strings are like, but even they’re only as bad as the ones I’ve played, you do not want to save money that way – but I’d reckon they’re probably even worse.

So What’s the Best Brand?

You wouldn’t walk into a music store and say “I need an electric guitar, what’s the cheapest?” and then just grab whatever the employees hands over the counter to you, but that’s the exact sort of thing that happens hundreds of times a day with guitar strings. That’s a little weird, right?

There are a handful of big brands when it comes to strings: GHS Strings (I use these), D’Addario and Ernie Ball are the top three. You really can’t go wrong with any of these; they all make high-quality strings, at reasonable prices.

These Companies Have a Lot of Different Sets, Which Should I Buy?

All the big companies sell a wide variety of strings, but the majority of guitar players just use the standard type. For electric, this means roundwound, nickel-plated steel strings. I’ll go through how this translates to each brand here. I’m going to link to the 09-42 version of each string, but you should be able to find other gauges very easily.

The standard electric strings from GHS 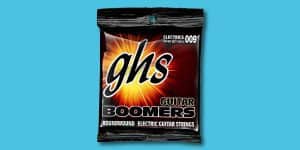 Guitar Boomers are GHS’s version of a roundwound, nickel-plated steel string. Tons of pros play these, and they’re all you’d really ever need. As I mentioned, these are what I use personally.

GHS make quite a wide variety of string (include some that have been cryogenically frozen!), and know what they’re doing, but you don’t need to get fancy – Boomers are all you need as a beginning player (and for 90% of people, even once you’re an advanced player). 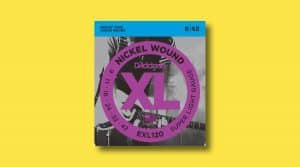 D’Addario is a very well known when it comes to music accessories, especially strings. The EXL120 is their version of a standard electric string, in the 09-42 gauge that we recommend for beginners.

Do be careful when you buy D’Addarios to not get the wrong model. Their packaging all looks almost identical, and you can easily buy a pack of coated strings (called EXP120 instead of EXL120), which won’t help you out but will cost considerably more.

Another good choice for electric guitars, from one of the big three makers 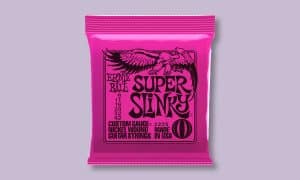 Ernie Ball has been around for ages, and have some eye-catching fluorescent packages. Their standard nickel-plated strings in the 09-42 gauge are called Super Slinkys — great strings by a great company.

And here are the best choices for acoustic strings for beginners:

A great set of strings from GHS 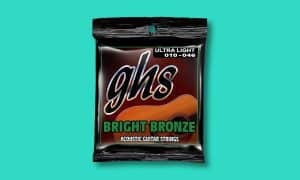 These are great strings, and they’ll make your acoustic sound nice and bright. The set I’ve linked is the Ultra Light gauge (010-046) and should be suitable for any beginner.

A fine choice from Ernie Ball 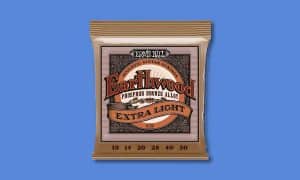 These strings come in a slightly thicker gauge than the GHS Bright Bronzes – instead of 010 to 046, they run 010 to 050, meaning that the thickest strings are going to be a bit thicker. It’s not a huge difference, but if you already have trouble playing acoustic strings, it might be worth sticking to a version that runs 010 to 046.

A nice string from D’Addario 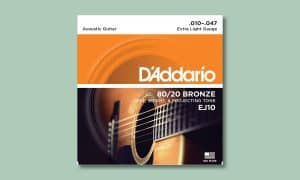 These come in 010-047, so technically a couple of them are a bit thicker than the GHS set highlighted above, but realistically, the size difference in this case is so close that it’s not worth worrying about.

Are there any other accessories I should consider?

Yes! The most important is a string-winder. You can change strings without one, but trust me, a good one will make your life much easier, and will turn string-changing from an annoying chore to something quite pleasant.

The string-winder I’ve used for ages now, and highly recommend, is this:

It may sound weird for me to rave about a simple string winder, but you really need this. I spent so many years winding my strings with little winders that people would just give to me at the guitar store, and they did the job, but they weren’t as comfortable as this, and I’d always have to go looking for some pliers to snap the end of the guitar string.

This winder has a cutter built-in, and it works very well. This will improve your guitar experience greatly, make sure to get one of these, or at least something very similar.