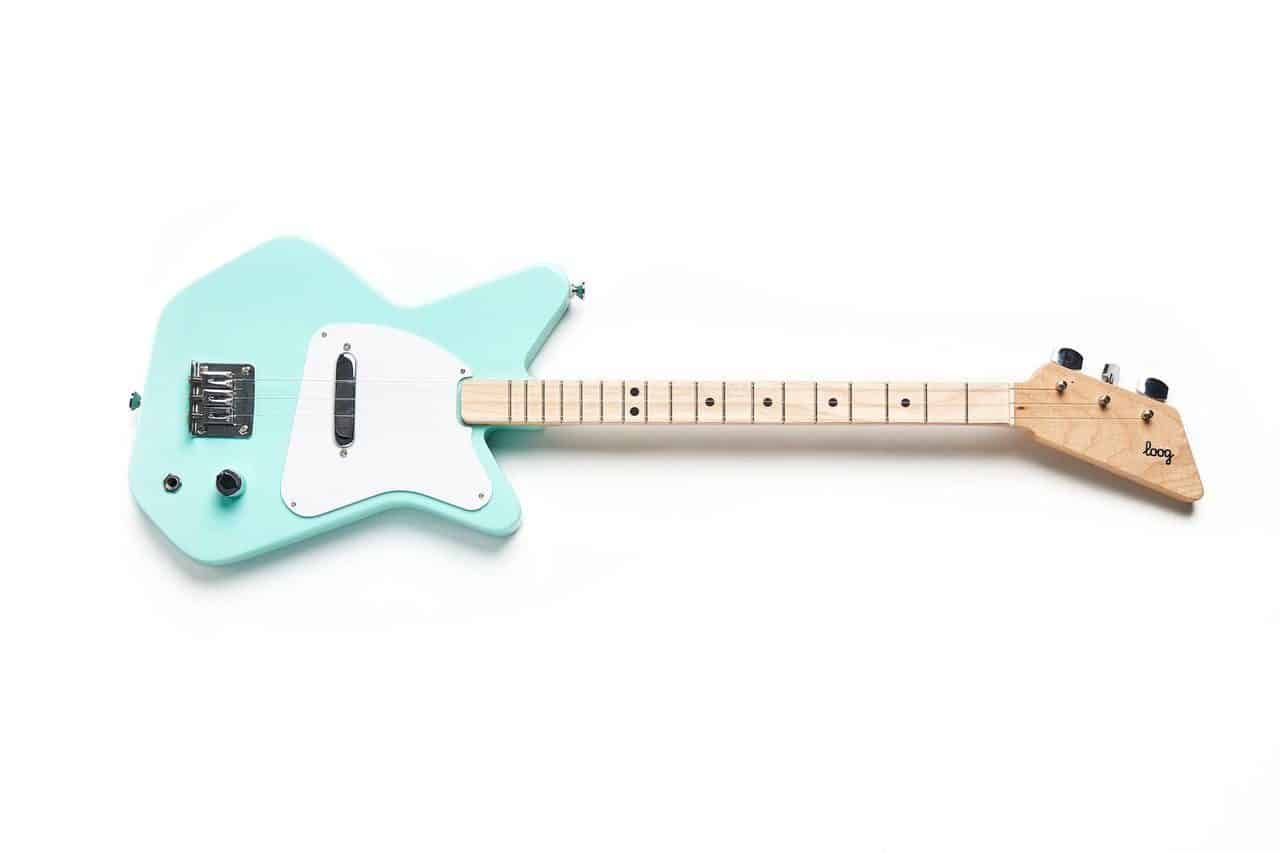 SUMMARY: Loog is a New York-based guitar company that designs three-string guitars for kids as young as 3 years old, that help to make learning the guitar easy and fun. This model is one of the new and improved Loog guitars that was introduced in 2017. It is recommended for ages 8 and older.  This is a good option for kids who might be intimidated by the size of a bigger guitar and having to learn 6 strings.

PROS: Small body size, slim neck, cool look. It stays in tune well and is made by a high-quality brand. Has only three strings to help make it easier to learn.

CONS:  It costs a little more than other children’s beginner guitars.

Loog Pro Electric is a beautiful, good quality electric starter guitar. It is quite difficult to find an electric guitar that is this small that sounds good and is good quality. It is recommended for kids ages 8 and up, but I think you could probably go a little younger. It comes with flashcards and an app that will help kids learn to play. The guitar has a great look and feel, and the sound is really good.

Read More: How to Find the Best Electric Guitar for Your Child

The Loog Pro Electric guitar is a 3/4 sized electric guitar with 3 strings, instead of the normal 6 strings. The body has a cool, post-modern, futuristic shape, there’s a definite vintage look to it. It comes in colors like black, green, magenta, red white, yellow and lucite.  This would be a nice gift for any child, design-wise it is very cool and not intimidating due to its diminutive size. In the picture, it is a 9-year-old who is on the shorter side for his age playing. 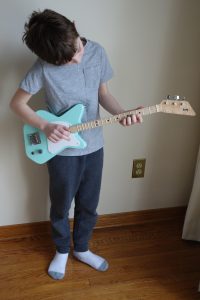 For an average child, this guitar is going to be very easy to play and to learn on. The stand out feature (other than the size) that makes this a great model for kids is the very thin neck. Kids often have trouble wrapping their fingers around guitars necks that are a standard size, so it makes it really hard for them to form chords. The reason the neck is able to be so thin is that the guitar only has three strings. As a guitar-playing adult, I did find this a little odd at first, but have come around to the three string is easier for kids to learn on idea. The Pro Electric comes with cute flashcards that should be aesthetically appealing for most kids. Your children will use the flashcards in combination with the Loog  App to learn how to play. 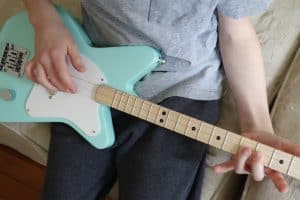 Despite the Loog Pro being much smaller and lighter than a standard guitar, it sounds great, and almost identical to a real electric. If you play it with a completely clean tone, it might sound a bit thinner than a full-sized electric, because the strings are thinner and shorter, but once you add in any effects at all, it sounds completely normal. I plugged the Loog Pro into a distorted amp and blasted a few chords, and a friend in the next room came in, and was shocked to see what was making the sound. Very cool.

The Loog Pro Electric just has one single-coil pickup, but that’s all it needs, given the intended audience. The sound from that pickup does sound nice and clean, and I did not have any issues with the tone or volume of the instrument. Not adding fancy electronics, and extra pickups, just for the sake of it, was a wise move by Loog.

The hardware on the Loog is basic but functional. Since the guitar is a unique size and only has three strings, Loog clearly couldn’t just buy existing hardware for the instrument, as most guitar companies do. Getting it custom made obviously costs more (which explains the price somewhat), so the bridge and tuners don’t feel like super-premium, heavy pieces of brass or anything, but that’s fine. The tuners and bridge work very well, and the Loog Pro stays in tune quite nicely, which is all that really matters. 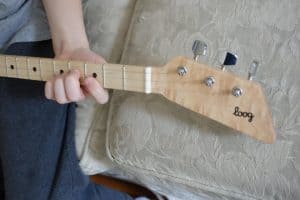 This Loog comes fully assembled. With previous versions of the Loog guitars you had to assemble it yourself. I prefer that they have now decided to ship them this way.

For a parent who may not have any experience with guitars, having to assemble one is probably fairly intimidating. This isn’t the cheapest electric guitar for kids, but you can see that it is made of quality material, and the workmanship is good for a guitar in this price range. It appears to be somewhat durable, which is an important consideration for children. If a kid throws this around, they might knock it out of tune, or maybe put a dent in it, but it doesn’t feel like they’ll actually break it unless they’re really, really trying to.

Things to look out for with this guitar

This is a three-string guitar, so it is designed to be easy for kids who are very young to learn how to play. If your child already knows how to play guitar, this isn’t the guitar for you. It does not come in a left-handed version.

Obviously, since it is an electric guitar you will want to get a practice app to get the full use out of it, although you can still play it without it being plugged into an amp.

Check it out on Amazon

Check it out on Guitar Center

Tom Martin
Tom Martin is a guitar enthusiast who has been playing for over 25 years. As a parent to two kids, Tom enjoys researching and testing out what makes a great guitar for kids. His real job is computer stuff.
Latest posts by Tom Martin (see all)